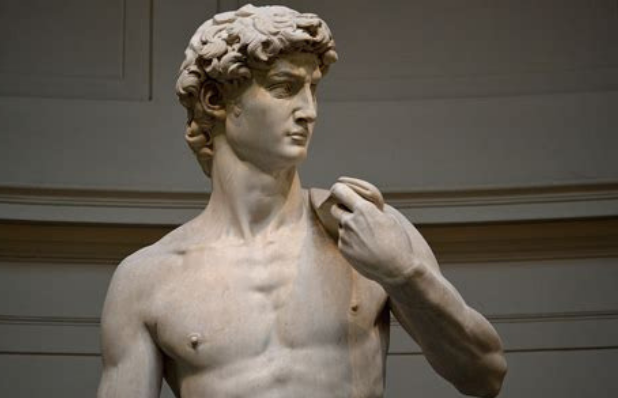 Becoming Who We Already Are... And What That Even Means

God promises, if we surrender, he will purify our heart. We will see God in and through our life as he develops the character of Christ in us. It does not happen overnight. It is a process. It’s a lifelong process. We have a role to play in that process. Our role is surrender. Our role is to practice what we already know.

Our role is to cooperate with God in becoming what we already are.

God already sees us right now in Christ as already having a pure heart. So we are cooperating with him in becoming what we already are in his eyes.

Let me explain that.

One of the greatest sculptures of all time is Michelangelo’s David. The story of its creation is interesting. A guy named Donatello was originally commissioned to do the work almost 10 years before Michelangelo was born. Donatello died two years into the project having only taken out a large chunk or two of unneeded stone. For over 30 years this 20 foot block of marble laid on its side exposed to the elements.

In 1501, a 26 year old Michelangelo convinced the powers that be to allow him to do the project. He was chosen over da Vinci and others. The 17 foot statue took over three years to complete. It weighs over 12,000 pounds. Legend goes that for 30 days he sat and stared at the block of marble all day long, just stared. After its completion it is said that when Michelangelo was asked how did you do that? He simply said, “I just cut away everything that wasn’t David.”

Everyone else saw a big block of marble. That’s all we see, just a big old ugly rock. But the master, Michelangelo, saw David in there. He cut away everything that wasn’t David. So David became what he already was in the mind of his creator.

It’s the same process with all of us. God has already declared our heart as pure. He already sees us in Christ as having a pure heart. Now we cooperate with him in the process of becoming what we are. The cutting away, the getting rid of the things that bind us and that trip us up and that cover us up.

If you fall down again, get back up again. This is where God’s people come in. We need people around us who love us, who love the Lord, to help us get back up on our feet and keep moving forward in the right direction. But the way things tend to be for me, and I have a feeling probably for a lot of us, is that when I fail, when I mess up, I want to hide from God. I don’t want him to look at me. I can’t talk to him. I sure can’t read my Bible because I’d just be a hypocrite, so I want to hide.

Don’t ever let sin keep you from God. When we do that, we’re just playing into the devil’s hands because he wants to separate us from God. He wants to isolate us from fellowship. Don’t ever let sin keep you from God.  Sin should drive us to God. Because that’s the only place we’re going to find forgiveness and mercy and hope and healing and the strength to get back up and move forward. When you sin, don’t run from God. The Bible says – he promises forgiveness

1 John 1:9 (NIV) “If we confess our sins, he is faithful and just and will forgive us our sins and purify us from all unrighteousness.”

Don’t misunderstand me here. God is not soft on sin. He’s not just some old man, winking his eye, “No big deal.” It is a big deal. He hates sin. It’s what separates us from him. It’s the reason that Jesus had to die for us. God hates sin. But he loves you. He promises to forgive you and to make your heart pure. So, don’t run from God when you sin. Run to God and receive forgiveness and the strength to get up and to keep moving forward.

I want you to take courage. God is at work in you. He’s already started this process. He already sees you as having a pure heart. He has decreed a pure heart for you. He’s got you in a process of becoming who you are. You don’t have to be afraid. Follow him into it. Expect the freedom that God has for you.

Is It Your Own Thoughts? Or is it God Speaking?

How Bitterness Hurts You Most